Together provides commercial mortgage to save local pub 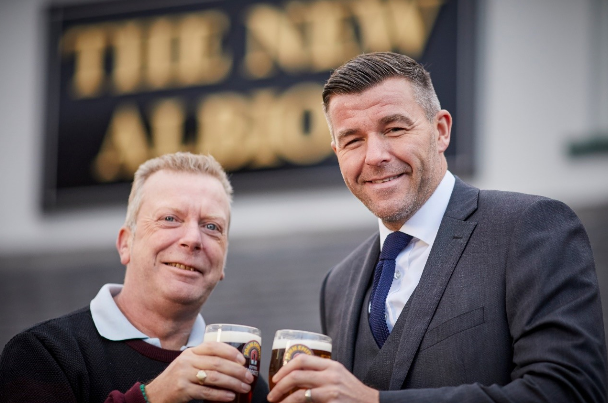 Specialist lender Together has secured the long-term future of a popular local pub in West Yorkshire after delivering a £133,250 commercial mortgage.

Paul Garner (pictured above, left) needed the funding to purchase the freehold inn following discussions with its previous brewery owner.

Paul had been the sitting tenant at The New Albion pub in Wakefield for nearly three years.

The pub’s previous Midlands-based owners had decided to stop brewing its beer through a third-party brewery in Yorkshire, putting the bar’s future in doubt.

Paul was initially turned down by a mainstream bank due to the complexity of the case.

“We’ve always been popular with regulars, but since we opened up as a free house – independent of the brewery – we are getting even more people through our doors,” said Paul.

“If we can carry on doing what we are doing well – and with the continued support of our locals – we’ve both got a really bright future ahead of us.”

Paul has a two-year-old son Louie, who he hopes will take over the business in the future.

“That’s why I bought the pub, as a nest egg for my little lad when he grows up,” Paul added.

After being declined by the mainstream bank, Paul contacted Phil Trueman of Reach Commercial Finance brokerage, who in turn introduced him to Together’s regional development director for Yorkshire, Barry Dillon (pictured above, right).

Following a visit, valuation and an assessment of the case, Together was able to agree to a commercial mortgage of £133,250 with a term of 20 years at 65% LTV.

Barry added: “We were able to deliver the goods after Paul was turned down by a high street bank.

“We went to have a look at the pub and Paul’s case for funding and everything stacked up.

“At Together, we have a philosophy of commonsense lending and an appetite to fund these kind of landlord takeovers for successful pubs at the heart of their communities, preventing them either being boarded up or flattened.

“Paul has some fantastic regulars, visiting a pub in an area with a great real ale culture, which means he – and Louie – should pull in the customers for years to come.”