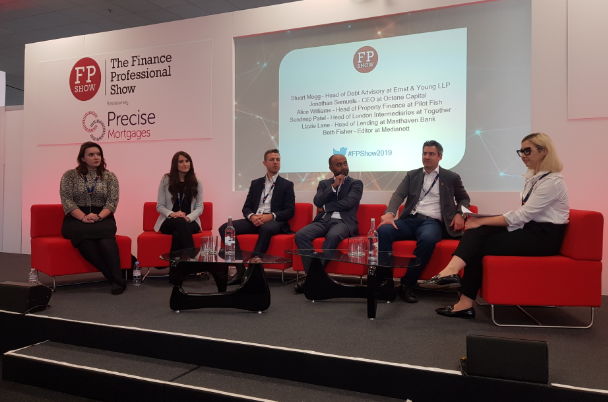 Jonathan Samuels, CEO at Octane Capital (pictured above, second right), has stated that a Jeremy Corbyn-led Labour government would be "incredibly negative" not just for bridging, but the mortgage industry as a whole.

The comment was made at the Finance Professional Show at Olympia London today (6th November) during a panel discussion on bridging finance, which covered competition and risk, lending hotspots, the future of short-term finance as well as what to know in the current financial climate.

When the panel was asked what the outcome would be if the current rate of lenders entering the bridging lending market continued over the next five years, Jonathan stated that you couldn’t look beyond the next five weeks.

“Well, we certainly have had a lot of new entrants and that is partly reflected in the absolute boom in terms of the lending in the industry.

“…It's quite significant — partly due to new entrants — although I guess quite a lot of the growth has come from the incumbents, the largest lenders,” he added.

“…I genuinely believe that the impact of a Labour government on, not just bridging, [but] the mortgage industry as a whole, will be incredibly negative.”

Sundeep added that increased competition in the market was beneficial as it gives the consumer more choice, but agreed we couldn’t look too far forward.

“It has made more [people aware] of our market, which is good, [but] I wouldn't look too far ahead and the instability, particularly economically, is a big factor.”

Lizzie added: “…Yes, we've had a lot of new entrants, but we have had companies leave the industry ... it keeps us on our toes.